Here’s an excerpt from Deborah Gregory’s original interview in Black, White, Other: Biracial Americans Talk About Race and Identity, first published in 1994 (and now available in a 20th anniversary expanded ebook edition): 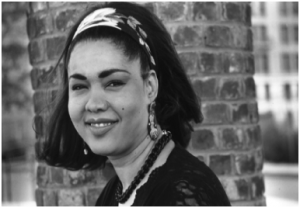 “I didn’t know I was interracial till a few years ago. My older sister Janet says that apparently my mother and my father fought a lot and he kicked us out. We went and lived in a hotel and my mother didn’t have any money, so she went down to welfare to get help and they told her she was sick and she needed to go to a hospital, and so she signed over rights to her three children, and we were separated at that point.

I was two, my younger sister was six months, and Janet was ten. Janet didn’t live with me after that point, and while she came to visit me in my foster home, nobody talked about my family there. Actually, my foster mother didn’t know a lot because Janet concealed it from her; she didn’t want her to know.

I would look in the mirror because I was pretty light and I would wonder what I was, but I never thought that I was half-white, because I asked my older sister, who distorts reality, quite frankly, and she told me we all had one father, our father was Puerto Rican, and his name was Joseph Novez. She says now she did that because she didn’t want the foster family to know the truth. She thought it was a stigma, and she didn’t want us to be hurt by that or for them to know.

My foster parents lived in the northeast Bronx, in a neighborhood called The Valley. I stayed with them until I was sixteen, and my foster mother died. They were black and very dark. My foster mother was very dark and very mean, and Janet didn’t tell her. Janet said that my foster mother would ask her questions, [but] Janet didn’t want her to know we were half-white because they would pick on us. My foster mother hated white people, but Spanish people didn’t come into her consciousness. She was a racist, just obsessed with how horrible white people were. I don’t remember her ever saying anything about Spanish people; the world was black and white.

So I thought I was half-Puerto Rican, and because of that, I learned Spanish very diligently and that became part of my identity. When I was sixteen I got a job in the supermarket because they needed Spanish-speaking cashiers, and I told them that I was Spanish. I had to wear a button that said, “Habla Espanol,” and I was very proud of that.

I wore a Puerto Rican flag on one side of my jeans pocket and a black flag on the other, and I remember one day leaving school, and some of the black kids said, “Hey, mira! Mira!” [“Hey, look! Look!”] They were making fun of me ’cause they obviously tuned into that I was having an identity crisis, and they were right. I was. I wasn’t even half-Puerto Rican. I didn’t know that, but they picked up something unconsciously.”

And then this, from another section of the book:

“The two most important words in my life would be foster care: That changed the course of my life forever. And then number two would be race. There’s no comparison after those first two—anything else would be a far run down the line. Those are the two most important things that have shaped my life and have caused me aggravation with a big A. If I could, would I change the fact that I’m black and white? Absolutely not. What I would change is that my mom wasn’t there. I’d change that.”

Expect Deborah’s 20-year update to follow shortly. Meanwhile, you can read her full 1994 oral history in the ebook.