What I got called today

Today I got called a “filthy jew.” This is not the first time it has happened, and in keeping with past instances, it appeared on the Internet and from an unnamed source: this one used the moniker “moremane.” In fact, today’s slander was a two-fer, in which I was disparaged alongside a woman who interviewed me a few years ago and posted a segment of it on YouTube. There was no more to moremane’s slur than adjectives and a noun—“Two filthy jews”—and it appeared in the comments section of the YouTube page, underneath a screen grab of the interviewer and I seated across a table from each other, Charlie Rose-style, my hands in the air as if grasping invisible baseballs about eight inches in front of my face. No elaboration from moremane, no explanation of what occasioned this declaration, no why-this-why-now context. No mention of or comment on the video’s actual content (which never mentioned Judaism or religion but did cover father-daughter relationships, black-white race relations in the USA, and biracial identity formation).

I know about the YouTube comment because I subscribe to an alert system that notifies me when anyone remarks on the segment. This is only the second alert I’ve received for this particular video. The first, which showed up in my in-box back in 2013, let me know that I had commented. As of today, “Two filthy jews” keeps company with a self-deprecating note in which I discuss the overly dramatic hand gestures I make throughout the 4:13 clip. 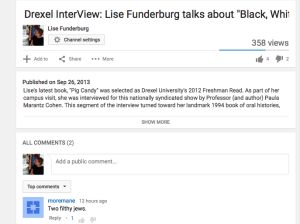 Like many published authors, I maintain a presence in social media. This is less technological prescience on my part and more a haphazard nod to publishers hungry for platform, the elusive virtual net they believe will capture sales and/or audience and/or critical attention for their writers. So I practice indiscriminate linking on LinkedIn; I blog now and then on a website that mostly serves as a cloud-based filing cabinet for old articles; and I tweet once in a very blue moon. I have a healthy following on Pinterest thanks to visually oriented procrastinators everywhere, and I am so susceptible to the rabbit hole of facebook (baby bats! a friend’s double-dutch champion daughter! The niece off at college!) that I regularly crank up a blocking app called Anti-Social. More passively and less frequently, I show up because my work shows up and sometimes gets passed around. This, and a surname often taken as an indication of my religion, is what brings people like moremane into my world.

“Two filthy jews.” Filthy, indeed. It slithered across me, oozy and viscous, like pus from a neglected wound. I remembered the clean room scene from Silkwood and wished I could disinfect the parts of me tainted by moremane’s drive-by derision. In short order, though, curiosity replaced disgust. I imagine the sting might have been deeper and more enduring if I were Jewish. But I’m not, nor were my parents or their parents or anyone we know of in either family tree. The epithet remains just as ugly, just as offensive, but its mistargeted (or semi-mistargeted) aim exposes its hollowness, the self-contained and self-propelling nature of vitriol. What was moremane’s intent, I wondered? What was exorcised by his/her condemnation? I’m guessing moremane doesn’t rank among the 358 people who actually watched the video, so how did moremane come across it in the first place? My interviewer’s last name was Cohen…does mormane type that into search boxes as a keyword? Did moremane feel like a winner after hitting “return” and landing on us?

I won’t ask YouTube to take down this sliver of hate speech. I don’t want to give moremane the thrill of having been banned, and besides, information is power; we all need to know who’s out there, even if it’s mostly cowards and thrill seekers who have confused anonymity with lack of accountability. I did, for a short while, amuse myself with the notion of replying in the spirit of accuracy. “What kind of bigot are you, moremane?” I would have written. “Be advised that it’s one filthy jew and one filthy mongrel. Thank you in advance for correcting this error.”